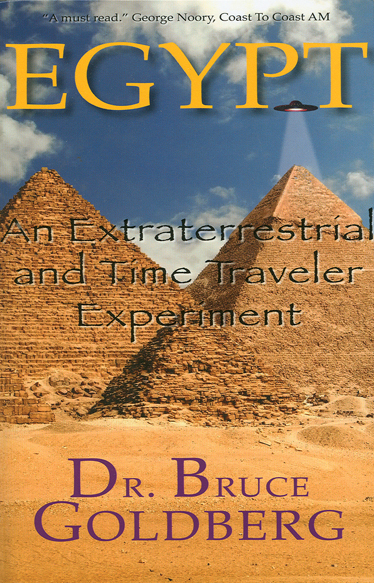 Secrets of Egypt’s Mysterious Past

How were the Pyramids Really Built?

ANTI-GRAVITY FLYING CRAFTS, AND MUCH, MUCH MORE, 1000’s of year ago.

“Dr. Bruce Goldberg has captivated the mind with this riveting theory of ET’s and ancient Egypt. A must read.”

— George Noory, Coast To Coast AM

Egyptian history has marveled historians and scientists for years.  Home to one of the most ancient and richest civilizations, its contributions to modern civilization are evident throughout the world today. The Egyptians not only invented numerals, but were among the first to use advanced concepts such as medicine, having over 30 medical specialties 5,000 years ago!  Other civilizations in the world copied Egyptian inventions, such as math and military tactics.  The pyramids remain one of the most significant mysteries of Egypt and have been the subject of debate between historians. Even the concept of monarchies began in Egypt.

Dr. Bruce Goldberg probes deep in the mystique of Egypt in his new book, Egypt: An Extraterrestrial and Time Traveler Experiment.  A sequel to Goldberg’s Time Travelers From Our Future, he explores the current popular belief of ancient Egypt and reveals the shocking, yet true and documented account of Egyptian history. He explains, among many other things, how anti-gravity devices, time travelers, and extraterrestrials all played a role in the formation of ancient Egypt.

Egypt: An Extraterrestrial and Time Traveler Experiment, is currently the only non-fiction book dealing with time travelers, discussing topics unknown to the general public, such as:

o  How Lemuria and Atlantis contributed to the development of Egypt

o  How to use self-hypnosis to meet real time travelers from the future and learn about your own possible abductions.

During Dr. Goldberg’s professional career, he has helped regress over 14,000 patients to their past lives.

In studying ancient Egypt, he believes we can learn about both our society and ourselves.

“By studying Egyptian history, we are truly looking into our own ‘Mirror of Karma,’ since we have all had past lives there,” remarks Goldberg.

“Time travel is a constant theme in my books,” adds Goldberg.  “To many, it is the stuff of science fiction books and movies; almost viewed in a comical manner, but it is real!”

“I tell you this:  There is clear and often overwhelming evidence which indicates it absolutely took place in ancient Egypt; I challenge people to set aside their skepticism and embrace possibilities heretofore foreign to them.”

Dr. Goldberg has appeared on Oprah, Regis & Kelly, Jerry Springer, Montel, CNN, CBS News, NBC News, FOX, and The History Channel, to name only a few.  He has conducted over 35,000 past life regressions and future life progressions on over 14,000 patients since 1974. His first book, Past Lives, Future Lives, was the first book ever written on guiding patients into future lives. His second book, The Search For Grace, was made into a CBS movie.

Thanks for subscribing! Please check your email for further instructions.